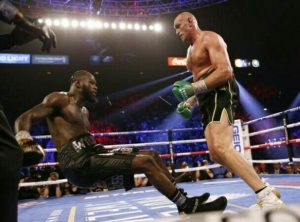 Before Wilder threw in the towel in the seventh round, Fury had knocked his opponent down in the third and fifth rounds, while he was dominant throughout and won every round with a spectacular performance in his rematch with the previously unbeaten American.

Recall that the pair drew their first bout 15 months ago and Fury remains unbeaten after claiming the WBC world title.

MY TRANSITION HOURS: “Why I conceded defeat for you to live”, Goodluck Jonathan opens up