A member of Revival Mission Church, wrote a letter to his church, demanding a refund of all the offerings he contributed to the church for the 19 years he attended the church.

This strange decision came from a Kenyan Christian, identified as Dishon Kinyanjui Kinuthia, who took to Twitter to share the letter he wrote to his church while warning that there will be consequences if he doesn’t get a refund.

This, has started generating an outrage on social media since he has written a very unusual letter to his church, causing quite a stir with his demands.

Dishon, who used to attend Revival Mission Church, Kabete, in Nairobi, said he was a member from 1997 to 2018 when he left the church asking that the church refunds the sum of 58,000 KES which is his estimate of his contribution to the church over two decades.

He said the contributions he made to the church were not “voluntary” but was done under “undue influence, duress, and intimidation.”

This funny and strange act has however generated to a lot of reactions as many took to their social media handles to react to the development as he asked the church to deposit the money in his account on or before November 31, 2020, or he will start legal proceedings.

Read the letter below: 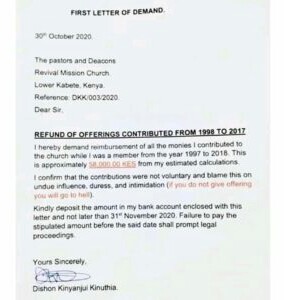 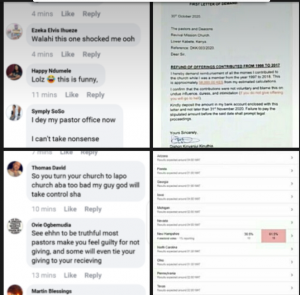 JUST IN: Kwara Govt Approves Wearing Of Hijab In Public...