The 2020 US Election is between President Donald Trump and former Vice President Joe Biden.

Due to these rules, a candidate can win the election without getting the most votes at the national level. This happened at the last election, in which Donald Trump won a majority of electoral college votes although more people voted for Hillary Clinton across the US.

How are the us election results reported?
The election results on this page are reported by the Associated Press (AP). AP “call” the winner in a state when they determine that the trailing candidate has no path to victory. This can happen before 100% of votes in a state have been counted. 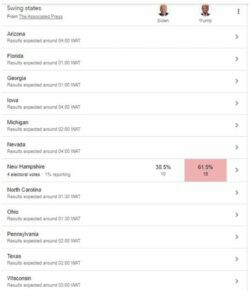 Estimates for the total vote in each state are also provided by AP. The numbers update throughout election night, as more data on voter turnout becomes available.

Note: Some very small areas of New Hampshire vote and publish their results at midnight on election day. They represent less than 1% of the statewide vote, and AP exclude them from the national count until more results come in.

Checkout US Election Results below…