A 10-year-old boy has been crowned as king of Iyiora Anam kingdom in Anambra West Local Government Area of Nigeria’s Anambra State.

According to the report, AKUBUISI OKONKWO ascended the throne after the last Ofala of his late father, His Royal Highness, Igwe ONYEACHONAM OKONKWO, the Olame 1 of Iyiora Anam.

It is reported that the young king’s father was also the youngest king at the time he ascended the throne and ruled throughout his life before passing away.

The report revealed further that, the youngest king is now the Olanme11 of Iyiora Anam and will rule the kingdom of Iyiora though out his lifetime, while AKUBUISI OKONKWO will henceforth be addressed as His Royal Highness (Igwe) Olanme ii of Iyiora. 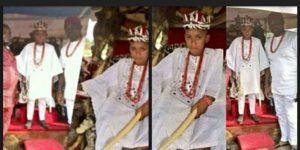 Following his crowning, the community of Iyiora Anam has congratulated him as they have already started addressing him as a king, while the news about the young king has triggered reactions with some people wondering if he will be able to handle the responsibilities of his new position.

JUST IN: Kwara Govt Approves Wearing Of Hijab In Public...