An attempt by Nigerian soldiers, Police officers, operatives of Department of State Security (DSS) have attempted to arrest popular Yoruba warlord, Sunday Igboho on the Ibadan – Lagos Expressway while on his way to Lagos has led to violence on Friday afternoon.

This was gathered by the OSUNREPORTERS NEWS through a captured video of attempt arrest of Igbhoho on social media.

Commenting on the incident, many Nigerians condemned the attempt to arrest Sunday Igboho by a joint team of soldiers, DSS operatives & policemen numbering about 40 on the Ibadan/Lagos Expressway whilst he was on his way to see Baba Ayo Adebanjo in Lagos. 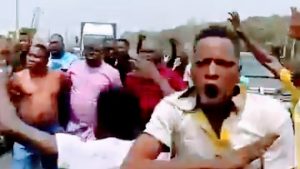 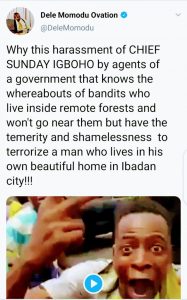 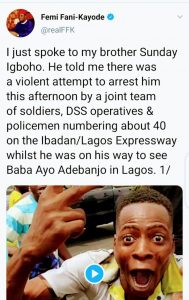 Osun FIBAN Mourns The Death Of OSUNDAYALAKINDE, Commiserates with Family,...

Nollywood ctress, Remi Surutu finally opens up why she slapped...

Teju is a natural leader – Aregbesola