Group lauds political record of Aremo Adegboyega, Says Other youths should emulate him

A youth based political group within the progressive cycle, ‘OSUN FUTURE VOICE’ has commended Aremo Adegboyega Lateef Adelabu for his untainted political record in the history of progressive in Osogbo and the State of Osun.

The leadership of the group revealed this in a chart with the OSUN REPORTERS on Sunday after the meeting in Osogbo, reaffirming their undiluted loyalty to Governor Gboyega Oyetola to move the State of Osun to a greater height.

The group praised Aremo Adegboyega Lateef for his roles as one of the stakeholders of All Progressive Youth Forum (APYF) and convener of the Osun State town hall meeting across the nine Federal Constituencies for the successful conduct of both party primaries and guber elections that produced Governor Gboyega Oyetola in the State.

“The untainted political record of Aremo Adegboyega is second to none, he has never involved in anti-party activities since his active participation in the Progressive politics till date.

“He started since the era of Ogbeni Aregbesola and now in Oyetola’s administration, and always ready to work for the success of any progressive administration.

“Aremo is a leader to emulate by any progressive youth, his is vibrant, brilliant, coolheaded, grassroot mobilizer, and progressive in nature,” Michael added.

Aremo Adegboyega contested for the post Osogbo Local Government Chairman in 2011, House of Representative Member in Osogbo Federal Constituency in 2014 and for the State House of Assembly Member in 2019 without been considered for any of the offices by the party, but stick to the progressive party and support the government of Ogbeni Aregbesola and Governor Gboyega Oyetola. 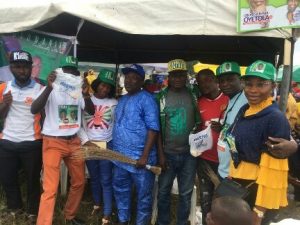 He is the current Director General of GIOMANIA GROUP and convener of victory prayer for APC/Oyetola’s court judgement in Osun State.

The group reechoed their support for the Oyetola’s administration and urged Osun youth to emulate it.

Are States, Local Government Above The Law

Ismail Omipidan: Are His Reports Believable? – By...

Who Will Rescue The River Goddess, Her Worshippers...

When Will PDP Collects ‘Gbekude’ From Dotun Babayemi...